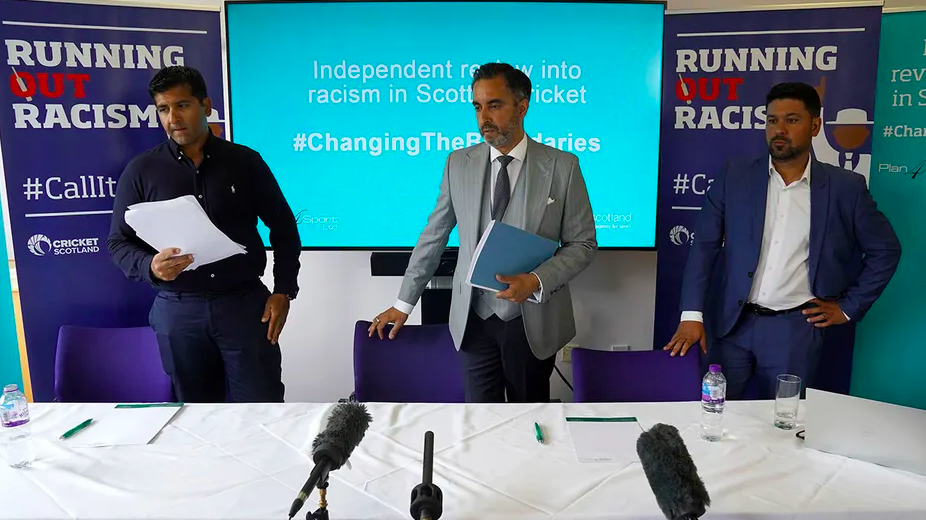 Sportscotland, the national agency for sport in the country, has found out in an investigation that 448 different examples of racist behaviour were reported in Scotland Cricket. This institutional racism within the country’s cricketing fraternity came in as a massive shocker, but none of the international players have responded yet, which also led to some angry reactions.

Ex-Scotland all-rounder Majid Haq was one of the first players to have opened up on the racist behaviour alongside his former teammate Qasim Sheikh. Their testimonies led to the investigation, and now Haq questioned the silence from other players.

On July 26, Aamir Anwar, the solicitor of Haq and Sheikh, took to Twitter to post a picture with the Scottish players taking the knee during the 2021 ICC T20 World Cup, questioning what the point of these actions was.

He pointed out that none of the white cricketers in Scotland cricket have opened up and condemned the incident, which only adds fuel to the speculations.

In a retweet to Anwar’s message, Haq mentioned that the white players don’t realise their privilege.

“Looks like it was nothing other than a bit of virtue signalling & tick box exercise because the deafening silence from a lot of them speaks volumes. They might feel uncomfortable but their privilege is never having to think you’ll not make the team because of racism.”

There have been a few exceptions, though, in the form of former skipper George Salmond, who supported the players who took charge. Sheikh spoke highly of Salmond and commended the leadership skills of the 52-year-old, who represented the international side in the 1999 World Cup.

Haq was previously sent home from Australia during the 2015 ICC World Cup and was later on suspended by the board for accusing the selectors of dropping him due to racial reasons. He had tweeted a message hinting that his race could be the major reason behind his exclusion.

Jamel Gardee, a cricket coach in the country, claimed that he was threatened by a board member for tweeting in support of Haq. Plenty of such revelations have come out since the report was published, adding up to the woes of the current administration.

Meanwhile, the International Cricket Board mentioned that discrimination of any kind has no place in cricket and the sport should be made for everyone. The ICC officials alongside all country boards across the world came together for the Annual General Meeting to discuss various matters, including the Future Tours Program.

“Discrimination of any kind has no place in cricket and everyone involved in the sport has a responsibility to create a safe and welcoming environment. Cricket is a sport for everyone and we will support the new board and leadership at Cricket Scotland as they work to ensure the sport is more diverse and inclusive,”

a spokesperson of the board said, per Sky Sports.

After the report came out, the entire Cricket Scotland board stepped down on July 24, with the governing body appointed by Sportscotland taking charge of the administration. They will be in charge of it until October 2023, following the review recommendations.

Scotland successfully made it to the ICC T20 World Cup’s Super 10 stages last time around and put up a few spirited performances against the odds. Their progress over the years has been very commendable, and this setback could not have come at a worse time.

The side will be taking on New Zealand in a three-match T20I series soon and will be featuring in the Qualifier stages of T20 World Cup in Australia.