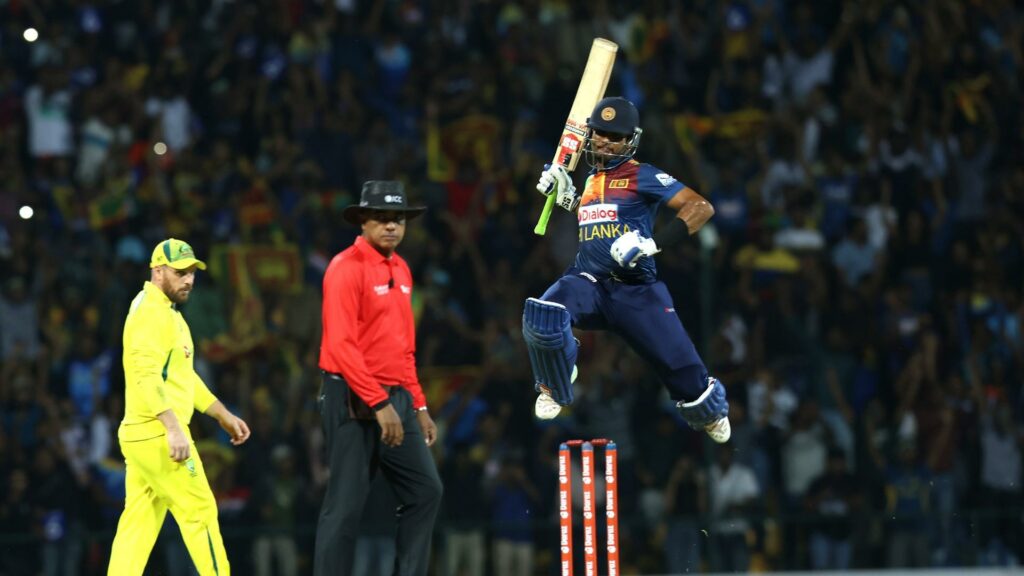 Sri Lanka claimed a consolation win to end the three-match T20I series against Australia on the back of their skipper Dasun Shanaka’s incredible knock in the final hour of play in Pallekele on June 11.

Shanaka blasted an unbeaten 54 off 25 balls to snatch victory from the jaws of defeat to help the Lankans Lions avoid what seemed at one stage a certain 3-0 series whitewash.

Walking in to bat at No.6 with Lankan Lions precariously placed at 92/4 in the 13th over chasing a stiff target of 177, the right-hander took the Aussie bowling unit to all corners through an innings glint with five fours and four sixes.

Criticised widely for their insipid batting in the previous two games, the Sri Lankans propelled to a much-needed victory thanks to their skipper, who soaked in appreciation from their fans.

Shanaka’s knock carried influence beyond the cricket field, as it gave the people of the Island nation something to rejoice in after a period of turmoil dealing with one of the worst economic crises in the Indian subcontinent.

The captain almost singlehandedly took his team home when the next highest individual score was 27 off 25 balls from opening batter Pathum Nissanka. Indian fans watching Shanaka bat in the end overs would’ve had a scary reminder of a couple of his amazing knocks in Dharamshala earlier this year.

The Australians had the game for the better part of the chase where, either side of Shanaka, only Charith Asalanka (26 off 17) looked in some kind of flow with his game. Considered a limited batting unit in the T20Is, it took the in-transition Sri Lankan side a special effort from their captain to earn a morale-boosting win.

For Australia, Josh Hazlewood (2/25) and Marcus Stoinis (2/8) were amongst the wickets, while Ashton Agar (1/23) delivered an economical spell. What plagued the Aussies with the ball was the highly expensive outing endured by Richardsons – Jhye and Kane – who went for 11.5 and 15.5 an over, respectively. The defending T20 World Cup champions missed their incumbents Mitchell Starc and Pat Cummins quite badly.

The first half went more or less according to plan for the Australians, who piled on a healthy score of 176/5 after a good start provided by their experienced opening duo David Warner (39 off 33) and Aaron Finch (29 off 20). Steve Smith (37*) and Stoinis (38) emerged as their fellow batting heroes.

What the Aussies perhaps lacked was one substantial batting effort, a standalone knock, which would’ve taken them to a more intimidating score in excess of 180-190 and taken the game completely out of Sri Lanka’s reach.

Ensuring they don’t do so was a task accomplished to a large extent by mystery spinner Maheesh Theekshana, who bowled an exceptional spell of 2/25 off his four overs. Sri Lanka also had Wanindu Hasaranga (1/33) delivering a reasonably good spell, while allrounder Chamika Karunaratne (0/19) kept the run-scoring down at his end.

It was this trio which ensured that, even as their team had familiar stutters with the bat, the game was not out of reach for an in-form Shanaka, who was later given the ‘Player of the Match’ honours for his scintillating knock in front of a packed crowd in Kandy.