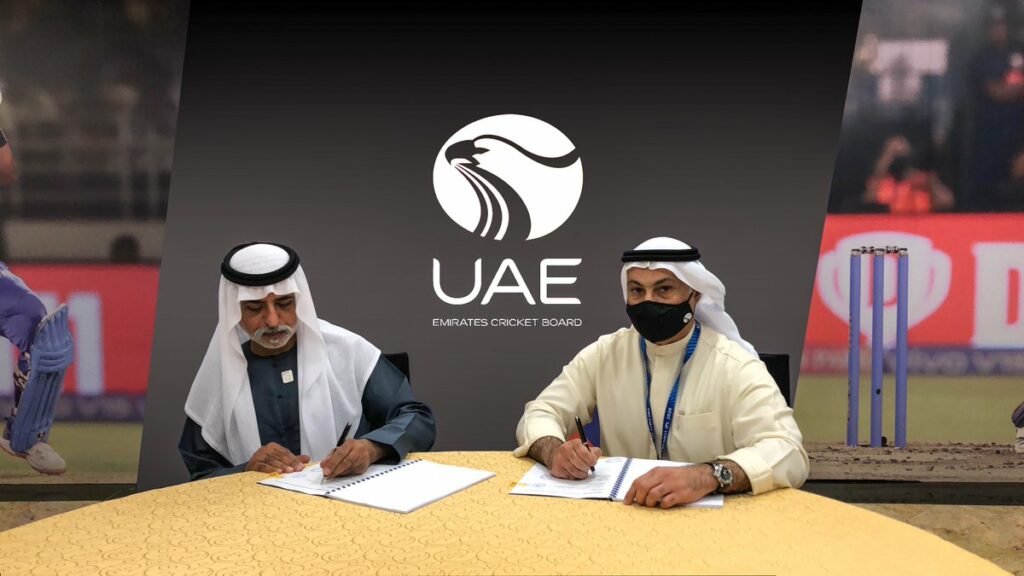 The Emirates Cricket Board, has granted a first right to its IPL franchises to sign its existing players at the upcoming first season of the UAE T20 League.

With the Global T20 Leagues gaining popularity worldwide, given the format’s fast-paced and entertaining nature, the Emirates Cricket Board introduced the idea of a UAE T20 League last year, with the first edition set to be played early next year.

It will be a six team competition, with three original Indian Premier League franchises – Mumbai Indians, Kolkata Knight Riders and Delhi Capitals – having their own separate teams on board. In a major development with the competition announced by the ECB, as reported by Cricbuzz, the three Premier League teams will be allowed the first right to choose their respective players outside of the initial draft or auction.

“Each franchise will be allowed to sign four players of their choice outside of the draft or auction which we will decide later. It could be any player who has a NOC from his home board,”

Mubashir Usmani, the secretary-general of the ECB, told Cricbuzz on June 2.

This would mean that the five-time IPL champions MI would be allowed to sign up the likes of Kieron Pollard, Tim David, Jofra Archer among other internationals, who are much sought after cricketers in various T20 leagues across the globe. The Knight Riders, in turn, would have the right to rope in the likes of Sunil Narine and Andre Russell.

The ECB, who will be operating the league, haven’t yet clarified if the six-team league will be preceded by a draft or an auction or both, with there being high chances of a draft system being put into place to avoid similarities to the IPL process.

The other three franchises are owned by the Adani Group, the Glazer family and Capri Global, who are new to investing in cricket franchises in global leagues. Attempts will be made to ensure a level playing field in terms of the squads build up ahead of the competition. Each of the six teams will be allowed a player fee of 2 million dollars, which is the second-highest purse allotted among the franchise based leagues after the IPL.

The first edition of the league is tentatively being planned to be scheduled between early January to mid February next year. That would mean that the schedule could clash with another league, which Cricket South Africa is planning to launch next year. Reportedly, the South African board has already requested Cricket Australia to consider rescheduling of the three ODIs between the two sides, slated to be played on January 12, 14 and 17.

CSA have made the move to ensure its international players’ participation in the league. CA, having already released its international calendar, have marked the three mentioned ODIs in the ‘subject to confirmation’ category. The ECB too, will have talks with the CSA to avoid an overlap and ensure a smooth conduct of the two competitions.

The UAE T20 League will be played in a round-robin followed by the playoffs format, with 34 matches being played combined by the six participating teams.

A few ECB officials, including its vice-chairman Khalid Al Zarooni, were present at the IPL 2022 final between the Gujarat Titans and Rajasthan Royals at the Narendra Modi International Stadium in Ahmedabad on May 29 on invitation from the Board of Control for Cricket in India.